GABRIEL AVNER UPDATED: 24 OCTOBER 2016 Save to WishlistOver the past decade, Mixed Martial Arts (MMA) has taken the world by storm. Not to be left behind, Tel Aviv is home to the Jiu Jitsu and MMA Academy, one of Israel’s top spots to train. More than just a great place to learn and spar, the club that is located in the center of the city, is as diverse as Tel Aviv itself.JJA Israel Tel Aviv©ZestyUrbanJiuJitsu

Bringing MMA to the Masses

For those who are unacquainted with the sport, MMA is a combat sport that is comprised of elements from Brazilian Jiu Jitsu (BJJ), Muay Thai, wrestling, and other styles. It requires a combination of endurance and mastery of technique that while challenging, is very accessible for those looking to try something new.

Gidon Sagher, who founded Tel Aviv’s Jiu Jitsu in 2000, is the head instructor. Sagher, who received his black belt from Master Ricardo De La Riva, lays out why he believes many people are drawn to train MMA, and Jiu Jitsu in particular:

“Every person makes for himself a narrative that leads them to come to train. Some people come looking for a way to stay fit or to learn effective self-defense. At some point though, the story begins to evolve and that’s when a lot of people find their break off from training. Life is complicated with work and family. What keeps a person coming back to the mats is a desire to seek out a deeper meaning through training. At its core though, from beginning to end, they have to enjoy it.”

Training is a constant journey of growth. Sometimes you will have a breakthrough when you succeed in a new technique and you can feel that you are progressing. Then you will also have those days when you hit a plateau and nothing seems to work out right for you on the mat. That’s when it’s crucial to have a strong group to support you and work through it. 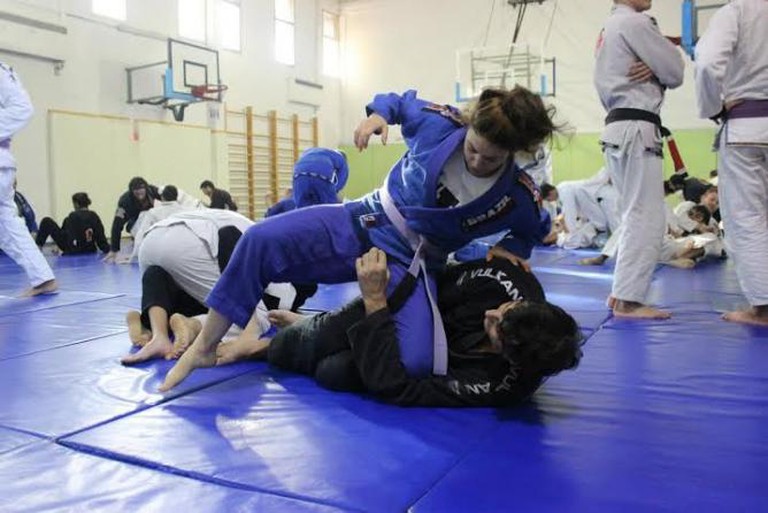 Building a Strong Community in Israel

The first thing that you notice when you walk into the room before the start of training the friendliness: the hugs and banter as people begin to arrive. While the number of people attending each class varies from day to day, strong relationships are formed as new friends are made everyday. Newcomers are greeted with a smile as the older members welcome them to the group and show them the basics.

The group itself is very much a cross-section of the city. A mixed group, the club also has a number of women who come to train regularly. The majority of the group is native born Israelis but if you keep your ears open, you can hear conversations in English, French, and Russian between some of those who call Tel Aviv and the group home. The group has also become an excellent place for networking and creating bonds that extend beyond training.

Some of these relationships have extended to the workplace. On the low tech side is Micha Chemia, the neighborhood barber. A long-time member of the group and purple belt, Micha’s salon has become a hangout spot for those looking to kick up their style. At the other end of the spectrum are guys like Ronen Klein who runs a UX/UI consulting firm called ANTARTICA, and has worked with people in the group on different projects. With lawyers, programmers, consultants, and other professionals, it can be a great way to find a new job or to get to know the scene. 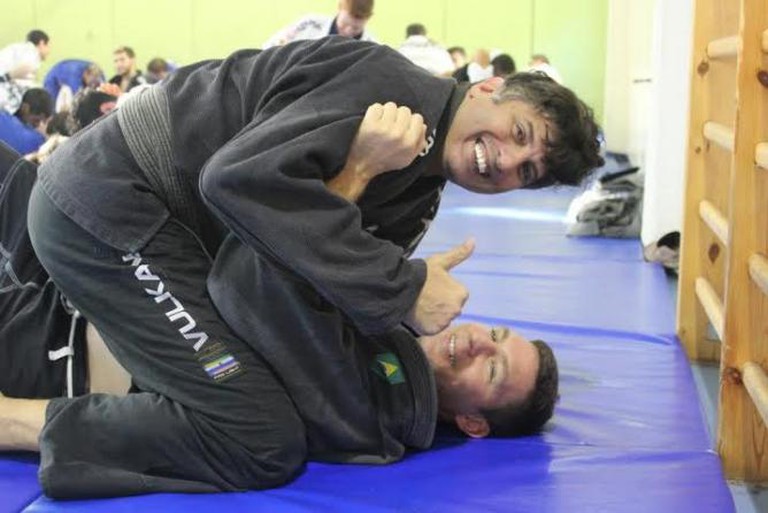 Over the years, the club has become known throughout the world as a must for fighters visiting in Israel. Tourists from places like Brazil, France, Australia, Alaska, and the UK have found joining the group for an evening of training allowed them to gain an insight into life here in the city. So if you are visiting in Tel Aviv, looking for a new challenge, or a sense of community, come down and experience this urban secret yourself.

link to the article